pathvIEw contains a number of powerful features that are designed to improve the testing process.

When comparing two instances of the same action block, pathvIEw will show the differences between them and indicates whether changed statements have been tested or not. If you do not use automated regression testing, then it is often not practical to re-test every statement, so pathvIEw will enable you to ensure that you have at least re-tested changed statements.

The Show Path feature enables you to quickly see the execution path to the selected statement. This is especially useful for complex structures where you need to see the decisions / branches in the code so that test cases can be designed to execute an untested block of statements.

The 'Latest Execution' feature flags the statements that were executed in the most recent execution of the action block. Whilst this is not a complete substitute for the ability to trace through the code and inspect views, it can often help solve an issue by displaying which statements were executed, thus removing the need to regenerate the code with trace enabled.

In the example below, the statements executed have a lilac background. 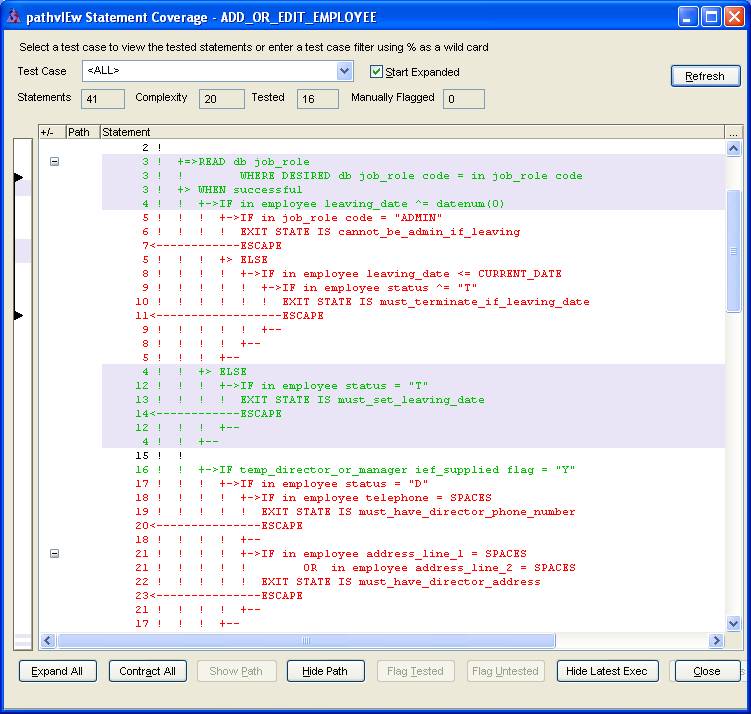 When testing the application, the tester (or automated test software) can specify a Test Case and the statement coverage is then logged against this Test Case. This data can then be used in the pathvIEw client to identify which modules and statements were executed for an individual or group of Test Cases, and potentially avoid duplication of testing effort.